Email ThisBlogThis!Share to TwitterShare to FacebookShare to Pinterest
Labels: wrap up 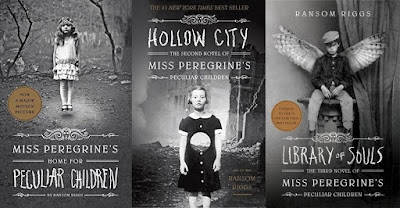 About himself:
" I grew up in Florida, went to Kenyon College in Ohio, then film school at USC in LA, where I still live. I write books and screenplays, blog daily for mentalfloss.com, and make short films."
taken from Goodreads


I have already written about the first book in the series which I read in June. In addition I must say that the impression was so strong and good that I’ve bought right away the other 2 books in this sequel Hollow City and Library of souls.
I extremely like the format of the books. First of all the cover is black and white, which gives them kind of retro look. Secondly, the pictures integrated in a story are a good and fresh move. In the first book Jacob discovers a lot of old photographs and I am as a reader able to see them too. In the 2nd and 3rd book the pictures are already part of the narration of what Jacob sees on his journey, they are not presented in a physical form in the story, but aim as additional description of people and places Jacob meets and visits during his quest. I would say that photos lost their appeal and are starting to be quite “unpeculiar” in 2nd and 3rd books.
I like how Ransom Riggs tells the story. He goes in many details describing new characters and places throughout the story. The plot of the series is also very wisely constructed, it seems like it is getting speed from book to book: quite slow and descriptive narration in the first book with just a few major actions; quite eventful 2nd book, where quiet pieces are 50/50 with the battled ones and the change of scenery is also quite quick. In the 3rd book the narration gains its full speed and one battle-like episode follows by another. It just does not allow you to rest until the story is finished and it comes to a calm and down-to-earth ending with a little magic at the end.

The story starts in our time and describes the ordinary 16 year old boy Jacob Portman, who was raised on his grandpa's mystical stories and but not believe in magic anymore. Grandpa seems to be disappointed, but does not try to change his grandson's mind. And then grandpa suddenly dies, presumably killed by the pack of dogs, but Jacob is not so sure, as he saw a monster from his grandpa's stories at a crime scene.
After quite intensive psychological therapy, Jacob persuades his farther to go to the small British island where his grandpa was hiding during World War II, to the school of Alma Peregrine. There he gets through the time loop to 1940 to real school full of strange and peculiar children.  Miss Peregrine explains that Jacob’s grandpa and him are peculiar people and have a distinct gift which he needs to develop.
In the meantime the strange killings occur in the village and children realize that their loop has been breached and the wight known as Dr. Golan is on their track. As Jacob is falling in love with a girl Emma and decides to stay in a loop with her to fight on their side. Dr. Golan manages to bring ymbryne Peregrine to the see where U-boat is waiting for him, but Jacob kills him first and together with Emma they save the cage where Miss Peregrine is kept in the form of bird.


After fleeing in a boat from the hollows the children are trying to hide in the mainland from wights who are on their tack.  They accidentally discover the loop full of peculiar animals. There they get to know that the ymbryne of this loop is in London and that they need to find her as Miss Peregrine cannot be kept for long time in the form of a bird, because she will lose her ability to turn into person and her human personality.
Children are heading to London and meeting a lot of difficulties on their way: country destroyed by war, wights attacks and loneliness. In London they try to find peculiar pigeons, as only they can bring them to Miss Wren, the ymbryne. They finally reach a time loop under the pigeon's guidance that leads them to Miss Wren, who is hiding in a building coated in thick ice to prevent wights from entering. She promises to help Miss Peregrine to gain her human form again. Finally Miss Peregrine is able to change form, but it is not her but her brother Caul, a wight. He imprisons Miss Wren and all peculiar children and is going to transport them to wights’ fortress. The books ends with Jacob finding himself in present London together with Emma and talking dog Addison and discovering he has the ability to speak to and control hollowgasts.

From the beginning of this book Jacob and Emma are separated from the rest of the team and they need to continue their quest alone. They both after reunion with the Addison, a dog with a nose for sniffing out lost children cross from modern-day London to wretched Devils’ Arche.  A boatman named Sharon serves as sort of a tour guide through the terrors of Devil's Acre. After unsuccessful attempt to get to hollowgast’s fortress Jacob is seriously injured and is brought to the house of Miss Peregrine’s second brother to recover.
From this house they rebuilt the loop to fortress and attack. Thought Caul’s army is destroyed by Jacob’s hollowgasts, he manages to take Miss Peregrine as a hostage and forces Jacob to follow him to the ancient Library of Souls where souls of old peculiar people are kept.
I would definitely say that this final book is much better than the 2nd. Unfortunately the author does not concentrate on old characters – they are imprisoned, but introduce even more and more new ones. All narration is concentrated on Jacob, as he gaining more power it seems he gains more attention. None of the peculiar children can compete, so this is almost one hero book, even the valiant Caul is kind of flat. But altogether it was a fine conclusion and nice ending, which is not really too soppy and logical.


Rating of the series

Posted by Julie Tyuk at 3:51 PM No comments: