Into the Water by Paula Hawkins 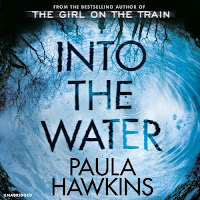 Blurb:
In the last days before her death, Nel called her sister. Jules didn’t pick up the phone, ignoring her plea for help. Now Nel is dead. They say she jumped. And Jules has been dragged back to the one place she hoped she had escaped for good, to care for the teenage girl her sister left behind. But Jules is afraid. So afraid. Of her long-buried memories, of the old Mill House, of knowing that Nel would never have jumped. And most of all she’s afraid of the water, and the place they call the Drowning Pool

My thoughts:
Firstly, this book is very different from The Girl on the Train. The ads that keeps saying "If you liked The Girl on the Train, you'll love Into the Water" are really far streched. Into the Water does not  focus in-depth on any character, but rather moves between the perspectives of many people.  It took me a while to wrap my head around this book. All the POVs made me confused for the first third of the book, I was trying to remember how they all fitted together.
Secondly, while both books contain themes of memory and the limitations on its reliability, the mysteries feel very different. The mystery in Into the Water is not as susspense as in The Girl on the Train. It's more like a domestic thriller, with less tension and excitement. It was more of an examination of various ties between people in a small town, and how everyone was in some way linked to the woman found dead.
I think this whole book was quieter, on the whole, than The Girl on the Train. The people were unlikable, and yet the stories were less dramatic; the climax less reveling. I never felt any excitement at the end, the book just drew gently to a close.
All of that said, I had a hard time putting this one down and flew through it. It was a decent, worthwhile read, and I can’t say I wouldn't recommend.