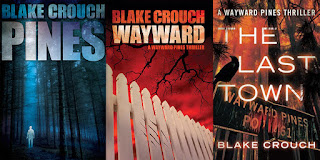 Blurb:
Secret service agent Ethan Burke arrives in Wayward Pines, Idaho, with a clear mission: locate and recover two federal agents who went missing in the bucolic town one month earlier. But within minutes of his arrival, Ethan is involved in a violent accident. He comes to in a hospital, with no ID, no cell phone, and no briefcase.  Why can’t he get any phone calls through to his wife and son in the outside world? Why doesn’t anyone believe he is who he says he is? And what is the purpose of the electrified fences surrounding the town? Are they meant to keep the residents in? Or something else out?

My thoughts:
I loved the series. The story was captivating and fast paced. The idea behind the series is great.
The main point is to get into the book without knowing anything. Do not read any reviews and reaction. Even the indication the genre can be a spoiler. Just read the first book and you know for sure if you will like it or not.

Name: Wayward Pines
Year: 2015-2016
Creator: Chad Hodge
Cast: Siobhan Fallon Hogan, Toby Jones, Shannyn Sossamon, Matt Dillon
Genres: Drama, Mystery, Sci-Fi
Language: English
Country: USA
Time: 20 episodes
I was looking forward to TV series even that I know the BIG TWIST, still I was sure I would enjoy it.
First couple of series of the first season, I was a bit irritated as I did not know where the series are going and I did not like little omissions in the plot. Then I calmed down and thought: "Here it is a new twist to the series, it is going to be different with different characteristics and motivations". But for a long time I could not believe that nurse Pam is actually being on the good side! Can you just imagine my shock? There must be a catch! It is a pity, that the suspense that I felt in the movie was not so intense, and in the series it felt more as an evil town turned against proper Ethan Burke, and not so much of his fear of going mad. But altogether the first season was a solid part of a story.
The second season made really angry and agitated. I actually hated how they twisted the story and it felt like another apocalyptic teen movie with the only difference: there was no "chosen one". Oh no, wait, there was - Jason. The beginning was abrupt and not logical (you guys get on the wagon and catch up later) - it felt like I started the season from the 2 episode, and every episode was about someone's death from the season 1. What was the point? What's the point to bring old characters in episode 2 and kill them in episode 3 -  just to connect the seasons? It really irritated me - the plot felt so raw, illogical and crumpled that I really wish I could un-watch this season. And I really hated how they handled Adam Hassler in the series. In the book he is a really dramatic figure and though he is not in the foreground, he is quite a strong and unique character. In the series, he is actually some kind of hysteric weirdo who did not wash for ages.
So the second season hinted my enjoyment of Wayward Pines